It’s Labor Day! A day off from work for most folks, a day off from school, but do we really know why?  Our friend Wikipedia educates us that Labor Day “honors the American labor movement and the contributions that workers have made to the strength, prosperity, laws, and well-being of the country. It is the Monday of the long weekend known as Labor Day Weekend. It is recognized as a federal holiday.

Beginning in the late 19th century, as the trade union and labor movements grew, trade unionists proposed that a day be set aside to celebrate labor. “Labor Day” was promoted by the Central Labor Union and the Knights of Labor, which organized the first parade in New York City. In 1887, Oregon was the first state of the United States to make it an official public holiday. By the time it became an official federal holiday in 1894, thirty states in the United States officially celebrated Labor Day.

Canada’s Labour Day is also celebrated on the first Monday of September. More than 80 countries celebrate International Workers’ Day on May 1, and several countries have chosen their own dates for Labour Day. May 1 was chosen by a pan-national organization of socialist and communist political parties to commemorate the general strike and events that took place around the Haymarket affair, which occurred in Chicago on May 1 through 4, 1886.”

So, how do we celebrate?  Cooking on the grill!! For the CC Team, this meant, BRISKET!!  Chef started the brisket around 9 last night.

We checked it at 4 AM!  It’s coming along sweetly. 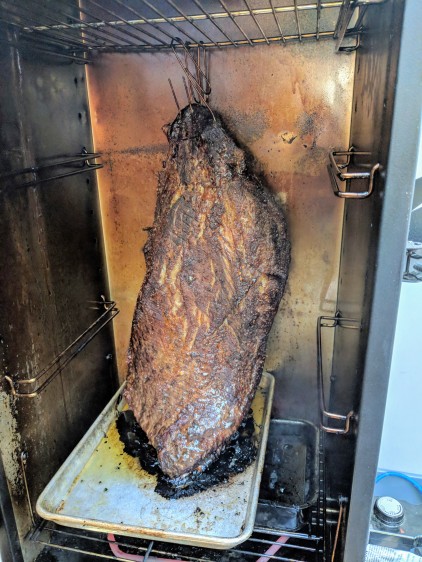 Ladies, don’t worry…we didn’t leave you out.  Smoking meat is not exclusive to the menfolk!  Get out there and show them what you got! *Sexy outfit optional…